Oxnard–Oktoberfest made its return to the historic Oxnard Farm Park and Museum on Saturday, October 9, as the venue drew large crowds dressed in German attire and ready to have a good time.

JHE The event was filled with great food and fun, including German Carrera music, food, desserts, drinks, crafts, activities for kids, a scarecrow contest and lots more. fun for the participants.

Jeff Maulhardt organized the celebration and was thrilled to bring Oktoberfest back to Oxnard.

“We’ve done 10 of those events, and I’m glad we can do it again,” he said. “There are a lot of people coming that I don’t know, it’s their first time here, and I’m sure they’ll want to come back after they’ve had a great time.”

He said the beer came from the Poseidon Brewery in Ventura.

“They have two German-style beers and one they brewed for our event, Borchard Beer, named after Christian Borchard, who planted the first crop on the Oxnard Plain, which was barley.” 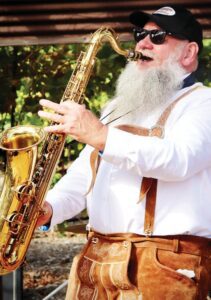 He planned to watch a lot of dancing but didn’t commit to showing off his moves.

“The Oxnard Downtown Lions Club prepares the food,” he said. “Tomas Garcia is in charge; it is part of the Tomas Cafe on Eighth Street in Oxnard. He is one of my former students; I taught at Oxnard for 30 years. He came back here to repay me for some of the abuse he did to me as a student, and he makes bratwurst with sauerkraut, German potato salad and apple strudel that he made in his bakery, and he also makes a pretzel.

He loves bringing people together during Oktoberfest and talking about German heritage in Oxnard.

“We actually have a history chart, and it has a list of all the German families that came here in 1867,” Maulhardt said. “There is some Oktoberfest art dating back to 1878. Oxnard had a large German population from the 1860s through the 1920s.” 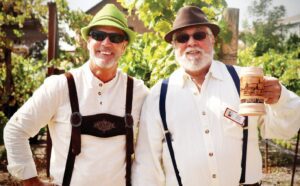 Garcia said he helped Jeff Maulhardt and organized the food portion of the event.

“We have classic German dishes on the menu; we have bratwurst on a bratwurst roll, baked pretzels with nacho cheese, apple strudel and pork cutlets with a small potato salad.

He said the park plants native plants, grapes and stuff for the environment.

“It’s one of our causes,” Garcia said.

“We’re here to have fun,” she said. “Kids can make little pretzel necklaces (which she wore) for when they’re hungry.”

She volunteers in the garden and loves it.

“It’s a great place to come and relax and garden,” she said. “We have grapes and vegetables here, and it’s a fun place.”

Cindy Milholland is originally from San Diego, but grew up in Oxnard.

“I brought wine from the San Diego International Wine Competition,” she said. “We pour wines from Oxnard, from Herzog, which is a big winery here.”

She fondly remembers dressing up for Oktoberfest.

“I’m German, but as Americans we’re a melting pot country,” she said.

“It’s a lot of fun,” he said. “We came to Oxnard and walked through some places to play. We haven’t gotten that far to play yet, but it looks pretty good. It’s a good crowd. »

Nikki Martinez-Rice arrived ready for the day with her dog, Gaucho, her mother, Angela Martinez, her husband, Steven, and her father, Tom Martinez.

“My parents are visiting us,” Nikki said. “We live in Santa Monica and drove up. We are all German, so we have to go to Oktoberfest. I love beer and pretzels.

Nikki’s husband Steven said he was more of a fan of pretzels than Nikki and noted that Gaucho could eat bratwurst the most.

The guys opted for cropped pants in honor of their German heritage.

“I just thought it was a great day,” Tom said.

Steven gets his hat from his dad.

“My dad makes a fool of himself at Oktoberfest,” he said. “He loves going back to Wisconsin, meeting his friends and going to Oktoberfest.”

“I love German folk music,” Angela said of her favorite German music. “I play the accordion. I took it out, but I would have to practice.

Albert Diaz said it was great to be part of the event.

“It’s a museum, it’s protected, and here in a neighborhood of Oxnard,” he said. “We have Germany and a bit of Oktoberfest here on a beautiful Saturday afternoon.”